"I feel extremely lucky that I was able to spend a few days walking around Prague this year. I’ve been to several large cities in the United States, but being in a large city in Europe is entirely different. Almost everything is in Czech and the traffic is absolutely insane, but it’s worth visiting. I’ve been to several cities in Europe and what I like about Prague is that it has a very unique style to it. Since Prague was the first city I had ever been to in Europe I have a soft spot for the place and I would love to go back again at some point in the future. I really appreciate the opportunity, IRES!" - Terence Garcia

"Getting to come back to the Czech Republic for a second time was absolutely awesome. I think that the trip this year was better than last year, both in the sense of a cultural experience and in field research. Getting practice with anything is crucial, and to get practice you need to do it more than once. I feel that the experience gained from the trip last year lent itself to the way we approached the science side of our job and the way we experienced the country this time around. I definitely felt like I attained a greater respect for the country, it's people, life in Czech, and it's history. Thanks IRES!" - Jacob Erickson

Jacob Erickson:  I was very intrigued about checking out this Geopark. Vlado told us it’s like a fairyland, and when you really get back in there, it truly is. You have these giant sandstone pillars that line the trail and tower over you. For me, it was like being in a video game…something I would build in Unity or something for a school project. I can definitely see where people get their inspiration from, this place is often featured in Czech movies.   It’s quite the location, something you’d want to shoot a medieval time period movie in. One thing that really got me was the crazy temperature difference between when you were out in the open versus walking tightly between these giant pillars. When you were really inside of them, the temperature dropped down to freezing.

Terence: As we started hiking up the road toward the rock pillars I wasn’t quite sure what to expect and all I can remember thinking was “I hope this is worth the hike”. When we finally reached the pillars, it became clear that the hike was worth it. The huge rocks and the diversity of the wildlife within the park were so beautiful that it almost looked fabricated. It was truly one of the most beautiful places I’ve ever seen.

Sindy: Being in the Czech sandstone towers had to be one of my most favorite hikes. From the breathtaking human figures to the intense almost 10 story stairway to the highest peak, everything was just magnificent.  One of my favorite aspects was not only the beautiful walk-ways through the larger sandstone towers but the pride they took in their wildlife preservation. It didn’t disappoint me that they closed down probably the most beautiful part in the park for wildlife preservation.  The six mile hike was beautiful all the way around and I look forward to one day going back  and hoping to see the other side of the gates. 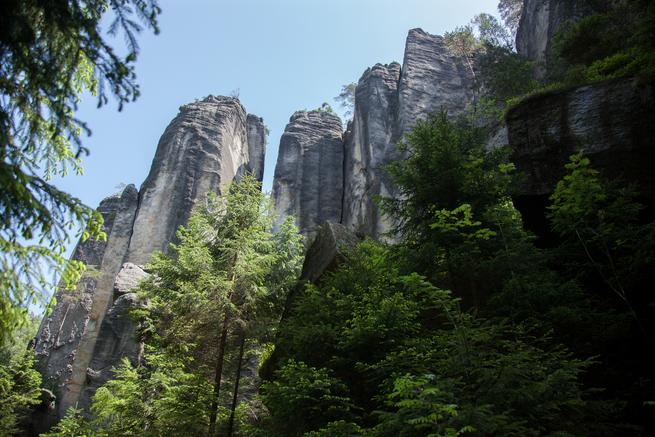 General Student Thoughts on Experiences in the Czech Republic/Prague

“The opportunity for me to travel to the Czech Republic is something that I will remember all of my life. From being immersed in the culture and history to the field experience and science, I loved every minute of the trip. I am thankful to be able to have walked away from this trip with not only a master’s thesis project but also a bachelor’s thesis project. This was a life changing opportunity and I cannot thank IRES enough! “ -Luke Romero

"My time in Prague these past two summers have been such an amazing experience and blessing I always wished to have. From room and board experiences in the peaceful pensions we stayed in, to the food and learning experiences, all the way to the memories we’ve made with fellow students and our professor Dr. Petronis. I will always be thankful for the conversations I have had with both the team and amazing people from all around the world. Thank you, IRES!!" - Sindy Lauricella

Adrspach-Teplice, “Rock Town,” in Czech Republic is truly a magical place. It’s not a “town” meaning a settlement built by people. The “town” is made naturally of huge rock formations that take the shape of pillars, columns, walls and labyrinths. What’s really cool and interesting is that almost every rock formation has its own distinctive name, for example “the dog”, “giant’s shorts” and “the butcher’s knife”.

As we walked through this giant maze, our colleague Sindy would intermittently give us explanations of how certain sections of rocks came to be formed, whether it was wind or water erosion, falling down and creating a cascading toppling effect, or something else.  Coming to this site definitely helped to further our interest in Geology, the natural processes of the world, and inherent beauty within these structures.