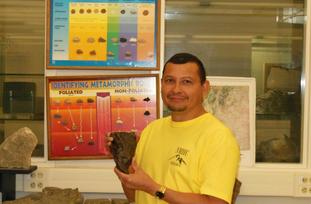 Geno is originally from Vaughn, New Mexico and has resided in Las Vegas since his discharge from the United States Marine Corps. He attended New Mexico Highlands University as an undergraduate, and received his Bachelor of Arts degree in University Studies and minor in Geology on December 2012. He continued his education here at New Mexico Highlands University, and started his graduate studies on January 2013. His research began on July 2013 on the Buena Vista Ranch, which is located in north central New Mexico. His study was based on paleomagnetism, anisotropy of magnetic susceptibility, and geochronology. His thesis is entitled, “Paleomagnetic, anisotropy of magnetic susceptibility, and geochronology of the Buena Vista Intrusion, North Central New Mexico.” The goal of his thesis was to determine if the intrusion was genetically sourced or related to the Mora-Ocate Volcanic Field, which is located north east on the Buena Vista Intrusion. Geno continued to work on this research for the next two and half years. He was awarded funding from various agencies such as, the American Association of Petroleum Geologists (AAPG), Rocky Mountain Association of Geologists (RMAG), New Mexico Geological Society (NMGS), Natural Resource Career Track – United States Department of Agriculture (USDA), Associated Students of New Mexico Highlands University (ASNMHU) and Sigma Xi. Geno recently presented his research along with his professors (Dr. Michael Petronis, and Dr. Jennifer Lindline) and fellow students (Sarah Shields and John Lynch) at the New Mexico Geological Society’s 66th Fall Field Conference. This conference was held here in Las Vegas on September 2015. Geno recently received his Master of Science degree in Natural Sciences with a Concentration in Geology on December 14, 2015. He plans to pursue a Doctrine of Philosophy and become a professor at the university level.